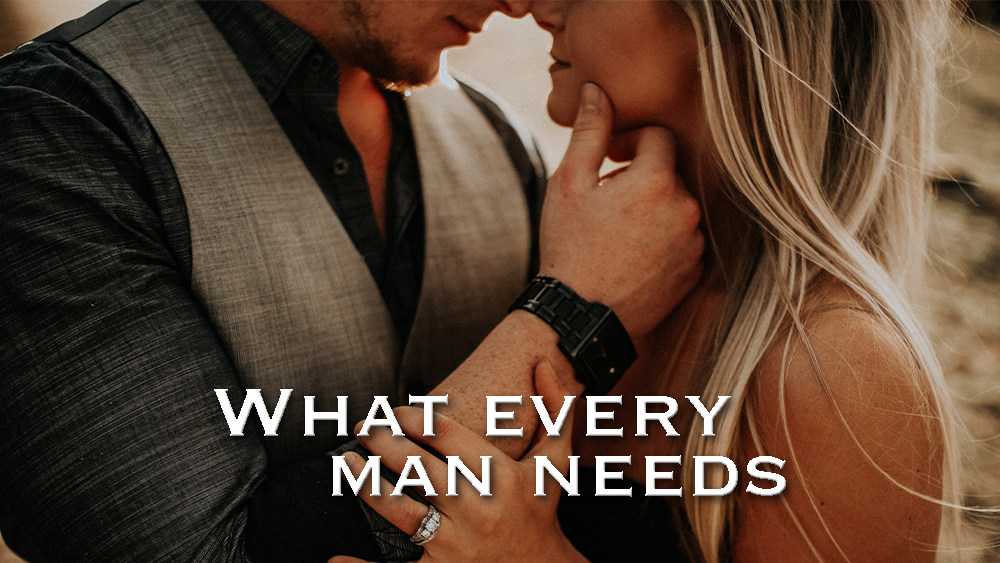 Girls sometimes ask questions like “Why does he get so annoyed at little things?” “Why are all men so unromantic?” Why does he overreact easily?”. Is there an answer I hear you say. Well maybe there is something.Its a true fact that the way a guy feels loved in a relationship is completely different to how a girl feels loved. Its not all about sex for men. For a girl to feel loved its a case of them having somebody whom they can talk to, somebody who understands their pain and goes through it with them. Its intimacy, affection, romance, security, protection, respect, and more.

However for a guy it may be some of the above but there is one thing that can make or break a relationship if left neglected.

Jack & Jill
I tell you a story of a couple. I’ll call them Jack & Jill but there is no hill. They where in a loving relationship. Sometimes however Jack would fail to put out the bins, or not cut the grass, and so an argument would occur. He was working on his business and wasn’t good for much when he got home, usually pretty late and tired. Understandably Jill felt like a single parent at times. Neither of them considered themselves to be perfect but Jack did forget to do certain tasks alot. This made life a little difficult for Jill who was looking after the kids. She would shout at him about how useless he was, this happened in front of the kids, and this left Jack feeling pretty worthless. Animosity began to grow between the couple and when friends where around Jill would often be heard saying how “useless” he was. She would say it in a joking manner, but this bothered Jack, and when he would say it to Jill she told him she was only joking. This didn’t ease the sting for Jack still felt humiliated. Now to some people this may seem trivial. The fact was this was driving a wedge between the couple. She would say things like “why don’t I call Mick from down the road, he is great with DIY?” Jill felt justified to call Jack out on the jobs he conveniently forgot to do. But this constant condescending was making Jack feel worthless. They eventually needed help as the communication and intimacy wained.

So what did Jill do wrong? Was she wrong in pulling him up on jobs he didn’t do? No she wasn’t.

Jack eventually began to hang out down the pub and anywhere he could to avoid going home. When asked what was wrong, Jack couldn’t even verbalize why he was so angry at his wife. He was building contempt against his wife. The number one reason in relationship break downs statistically is contempt in a relationship. The answer was simple though. From experience there is one thing men require in order for a relationship to work. That one thing is “respect”. Not the “I’m better than you respect” but more a case of “please don’t put me down all the time”.

Respect
A man receives love by the respect he is shown. There are other important factors of course, but respect is of the utmost importance. Putting him down in front of friends. Telling a man he is useless will cause him to be useless. He may take on the role. Man and woman are equal and we both need to respect each other equally, but for men, feeling respected is important. Men don’t want to be disrespected or embarrassed among friends. Respect empowers a man. Just like it does for women. One of the biggest causes of relationship break downs is contempt.

Temper, Temper…
People often say things like “why did that little thing annoy him so much”. The reality is, when a man feels disrespected, it will nearly always get a response. A little thing like somebody cutting him off in traffic could get a full blown flare up due to the fact the man feels he was disrespected on the road. It is different for all men about what levels of disrespect makes them angry. But one thing is for sure, every man desires to be respected. Not the 1950’s “the man is the boss” stuff. Its just simple try not put him down or be condescending, especially when out with friends or family. And it goes without saying a man should always respect a woman just as much or even more. But I’m chatting about men in this blog, cause men never like to talk about their feelings.

Romance
Its not about who wears the trousers but instead, its about working as a team and both being equal, male and female. Men can become Casanova overnight when you show them the respect they crave and they must show it back too. It doesn’t mean they are better than the woman in the house or anything like that, it just means you show him you are equal. You may have different strengths but still equal.

Tough being a man
It can be difficult to be the husband, the partner, the other half, and all the other things a man in a relationship should be. It can also be tough being a wife and a mother. Us men sometimes just need a little encouragement or a few simple words of affirmation and that will make our day. We aren’t the best at communicating our feelings, but we do have them. You may have to ask a few times, but eventually we’ll get there. I suppose there is truth to the saying “behind every good man is a great woman”, so to all the wives out there, us men do our best, but we do need your support.

I will also say how good it is to know your love language so below is a test that can show you other areas of importance to you both as a couple. Hope this is a help and if you have any thoughts you’d like to share, please comment below or click here for my FREE NEWSLETTER.

In this article:marriage, relationships
Up Next:

The joys of being Single

Are you an effective team?