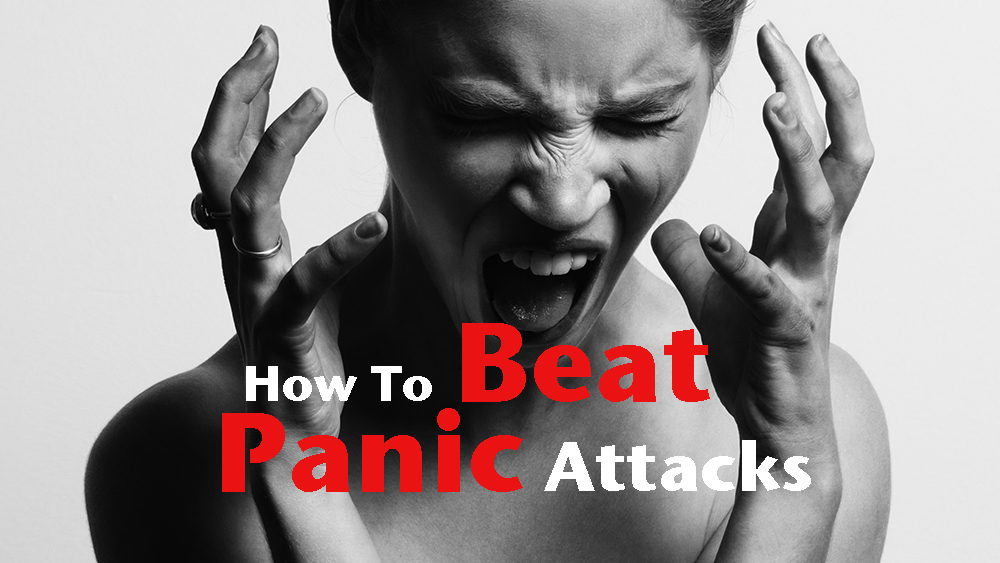 How to deal with panic attacks. Panic attacks are an awful thing to go through. For some people they can be a regular thing, for others they are less frequent. But if you want to beat them, then read on.

From helping people over the years I have put together some of the most common questions my people ask me about panic attacks and anxiety attacks.

Can they kill me?
A panic attack has never been recorded as the cause of death on a death cert as far as we can tell. As awful as they are, they have never caused somebody to die. There is no record of a heart attack induced by a panic attack that I could find! So the answer is a “panic attack” can’t kill you. Worst case is you’ll faint.

Fight or flight?
Without getting too complex, here is where panic attacks physically come from. When your body perceives a threat, like for example a large vicious looking dog growls at you, or a tremor of an earthquake, or something that gives you a split second reaction of “I’m in danger”. Your body releases adrenalin from your adrenal glands. The purpose of this is to raise your response time, elevate your heart rate so that you are ready for action. Some call it the “flight or fight” instinct built in to us. It’s a great thing, it raises your senses, you get a little stronger, you have a heightened state of awareness, your heart rate goes up, and are you are ready to tackle whatever threat comes your way. This was quite important when dinosaurs roamed the earth and man wasn’t the only hunter in the woods. It’s a protective instinct, it’s being battle ready. This response to a fright is normal and healthy.

What is a panic attack?
A panic attack is when you have a “fight or flight” response for either no reason at all, or because your mind is telling your body that there is a threat when really there isn’t. It’s a response to a perceived threat, and not a real one. Put another way, it’s the experience of physical and mental panic for irrational reasons. An exaggerated or over response to a thought or belief. Your heart rate goes up, you might feel pain, shaking, shortness of breath, light headedness, sweaty palms, these are all just a few physical symptoms a panic attack causes.

Why do I get them?
A question that any client I’ve ever worked with has asked me. The “Why me”, “What am I doing wrong?”. It’s true some people may never go through one. What’s also true is many people do go through them but they don’t want to talk about it. The reason you get them can be from two ways:

1: You may suffer with anxiety, or a stressed mind. Stress and anxiety aren’t bad for short periods. But if you have them for a long time and are constantly under pressure, your nervous system is put under pressure due to lack of rest. Now don’t worry, this doesn’t mean your nervous system is damaged, it just means that your body may be releasing adrenalin for a longer than recommended time and your senses and thoughts are at an awareness state for so long that you may become overwhelmed. You may become agitated easily, depressed, or your rationale thinking can become distorted. This is all reversible, but it can cause panic attacks out of the blue. It’s basically the body thinking that due to all this adrenalin in the system there must be a threat and generally happens on a sub conscious level. Your mind is basically telling the body, more adrenalin, more energy, keep going, and this can actually bring on panic attacks. But when a panic attack comes, our rationale mind says, what’s caused this? We then can associate the panic attack with something that isn’t the cause. I had a friend who was working crazy, his personal life was hectic and in a shopping centre one day he had a panic attack. He then thought it was the shopping centre, and he developed a fear of the shopping centres which turned into agoraphobia(he got over it eventually). Basically your body is holding stress and realising adrenaline because of this stress, it eventually triggers a physical response (panic attack) and your mind is then left panicking as to why are we panicking! When you feel anxiety your mind instinctively tries to figure out what the threat is and it can make mistakes. Like with my friend, it was nothing to do with shopping centres.

2: The other way a person can get them is when they get overwhelmed by an actual threat. It is quite common for people who have traumatic experiences or near death experiences, they can develop panic attacks. They have a fear that it could happen again and the body goes on alert mode, and the littlest thing can trigger a panic attack. For example take Henry. He thought he was having a heart attack when really it was his gallbladder. While waiting for the ambulance due to the chest pain, he had a panic attack which he thought was a heart attack. It took him time to realise what actually was happening and after I worked with him explaining what was happening, he never had them again. it took time.

How to stop a panic attack?
If a panic attack happened right now, you can take control. Purposefully ignore all thoughts (this is difficult I know) and focus on counting from one to four. Now focus on breathing “slowly in” while counting to four, then “slowly out” while counting down from four to one, while breathing through pursed lips. Count to five or even six on the out if you can, but you don’t have to completely empty the lungs, just till comfortable. This is a manual override of your respiratory system and causes a calming effect. Bring the air into your belly rather than chest. With practise you can stop a panic attack anytime or anywhere. This is difficult to fully explain in text, but I hope you get the idea.

How do I stop panic attacks for long term?
I call the solution the TMR technic.
Talk:
I do advise for you to chat to somebody that understands them. Feel free to email me of course. Get knowledge and know its fixable. Get to the root cause of why they started. Everybody is different and so you need to talk and understand your triggers.
Move:
Physical activity is a great way to expel the extra adrenalin in your system, so get active.
Relax:
Learn to have time to relax everyday. Your body and mind will thank you. `it needs to be quiet time.

Conclusion:
The good news is they don’t kill and you can stop them permanently. You most likely will need help, so talk to somebody. If you want to Skype me or meet one2one I will gladly help. Get the help, and move past them forever. I have helped many people get past their fears and panic attacks, but the real key is understanding them, you are the one that will ultimately overcome them. Best of luck on your road to recovery and I hope this helps. If you would like to sign up for our free e-newsletter its simple to do at this link HERE. You can also contact Mark by leaving a message HERE.

A blog by Mark Fennell

The views and opinions expressed in this blog should always be checked with your professional mental health expert before initiating any suggestions from the writings of www.markfennell.ie

In this article:anxiety, fear, stress, thoughts, worry
Up Next:

Because I’m worth it

The Key to Being Happy!